Ocean Alexander makes art masterpieces. He operates on a creative wave length that is a privilege to be around. His art work spans all over the states, and I have had the privilege of developing a close friendship with Ocean. We often talked about teaming up for a joint creative project, and I am proud to feature my friend as the first in our Artist Collaborations. We met up at Oceans studio, kicked it and had some laughs sharing stories. “If you can integrate or flex your knowledge in any sort of artwork that you do, I think that’s attractive.” – Ocean Alexander.

What memories come to mind when you think about drawing as a kid.

My mom would take me to the park across the street where we lived in Dunedin, FL and she would correct me. We sat on a park bench there across from another park bench by a little lane that led to a kid’s park, and she would say “Draw that bench”. So, I started drawing it and she said “No, you’re drawing what you THINK it looks like. You’re not drawing an actual bench, you’re drawing what you THINK that bench should look like.” That really stuck with me. Like, if you draw a chair or a person, what does a person look like? So you bring all your pre-conceived notions, your biases, into what that thing is. But then you aren’t actually seeing it for what it actually fucking IS. It’s right there in front of you! If you just look at it for what it is and stop bringing all your own shit in your head to it, then you’ll be able to draw anything without fucking trying. If you just look at it.

I started being able to draw realistically at 5 or 6 by just looking at it. Then when I was 8 or 9 I read some scholastic art magazine in school that said “If you are an artist and are right-handed, everything is left-brained.” I thought “Wait a minute, if it works like that I should be able to draw better and copy things if I turn it upside down.” So do these two things the next time that you want to copy a picture: take a picture of something you like and copy it straight away, left to right. Then turn it upside down and try to copy it the same way. I guarantee you it will be almost identical. It’s crazy.

You said art helped you in school, tell me about that?

I was never great at math in school until we started geometry. The reason I was good at geometry is that everything was now an actual picture! I could SEE a triangle. I could SEE a circle. I could see the lines, so now that makes sense that this is ¼ of circle, or ½ of a triangle. I was like “Oh! That’s Math!”

For example, this guy. (walks over to a piece hanging on the wall) If there was no writing on it, it would be compositionally incorrect. Like, if you have something dead in the center of a painting, then it’s just a fucking picture. Lets say you take a picture of a house on your phone. You look at it and say “Damn, that’s a really good picture!”. But it isn’t because the subject matter means anything. It’s because there is like a dude walking on the sidewalk. It’s because the lamppost lines up. It’s mathematically correct. Your brain registers that, but you don’t look at that mathematically you know. 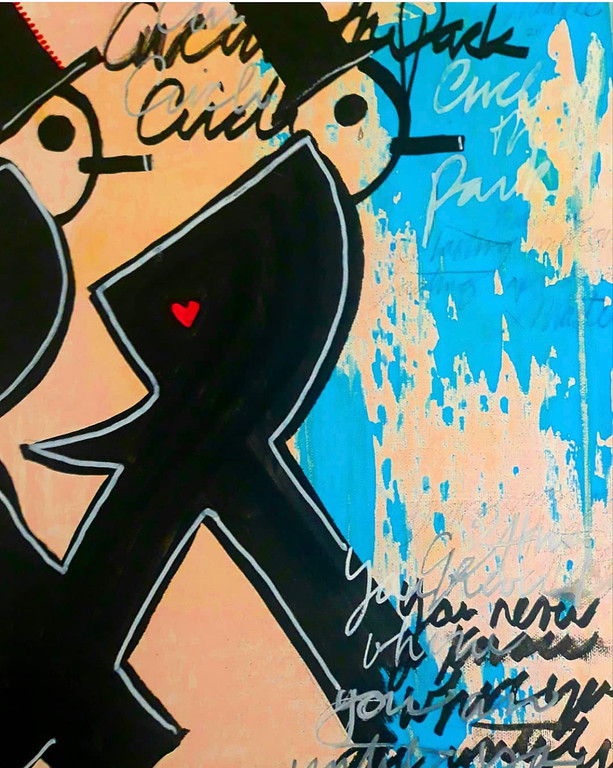 In your artwork you paint hearts in certain spots, why is that?

So I would walk into a store and look at a picture and think to myself “WHY do I like this picture? It’s not because of the subject matter. It’s because of the placement of the subject and where it sits on the painting. A little off to the right, or off to the left, or up and down, or it occupies a part of the canvas that separates it from the rest of it. So I would look at that, and if the composition looked off, I would draw a heart to fill in the space.

Love the journey of following your heart and pursuing your passion. See what Ocean is working on now @oceanalexanderart and don’t forget to share YOUR story with #iwearmyHOMS